What Does Cyber Mean?

What Does Cyber Mean?

The word "cyber" denotes a relationship with information technology (IT), i.e., computers. (It can relate to all aspects of computing, including storing data, protecting data, accessing data, processing data, transmitting data, and linking data.)

(For example, early computers and home PCs from the 80s and 90s do not attract the term "cyber.") (For example, IT security sounds more routine than cyber security, which implies a guard against the latest attack types.)

What Type of Word is Cyber?

Note: Like many compound nouns (especially modern ones), those featuring the word "cyber" can be written as one word (cyberspace), as two words (cyber space) or as a hyphenated word (cyber-space). There is no clear guidance on this, but usage will eventually dictate which versions are acceptable. For now, try the one-word version and if your spellchecker dislikes it, go for the two-word or hyphenated version.

("Cyber attack" (as two words) is approximately twice as popular as "cyberattack." [click here for evidence])

("Cybercrime" (as one word) is marginally more popular than "cyber crime." [click here for evidence])

("Cyberspace" (as one word) is considerably more popular than "cyber space." The difference is so marked, the two-word version can now be considered a spelling error. [click here for evidence])

What is a hashtag? What is Cyber Speak? An infographic explaining when Cyber Speak might be inappropriate Spotting internet grooming Spotting drug abuse Different ways of saying "I love you" online
The evolution of the selfie The evolution of LOL Text speak with numbers Inserting tone into your texts Our English grammar site Our mathematics site

The Origin of "Cyber"

The word "cyber" came to prominence with the term "cybernetics" (the scientific study of controlling and communicating with systems using technology), which was coined in 1948 by the American mathematician Norbert Wiener (1894-1964).

The word "cyber" originates from the Ancient Greek verb kybereo meaning to guide, to steer, or to control. 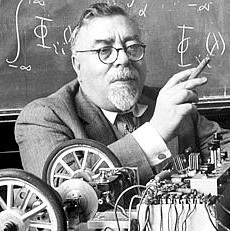