What Is a Hashtag?

How Is a Hashtag Used?

Hashtags are words or phrases preceded by the hash sign (#), which is really called an octothorpe. 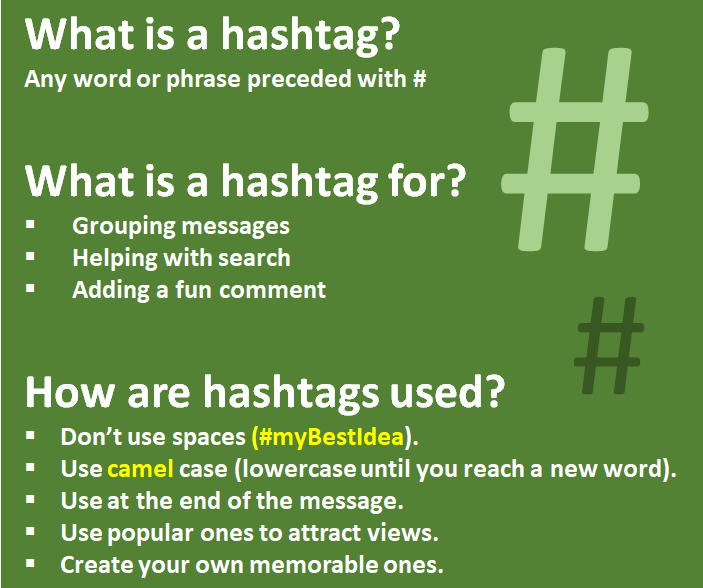 Hashtags have been used in telecommunications since the 1960s. However, they entered the mainstream in the 21st century, with the release of Twitter. Hashtags are commonly used across social-media platforms and have become commonplace in everyday speech and writing.

Using a Hashtag in Everyday Speech and Writing

It is common to see a hashtag in everyday speech and writing to add a short, often witty, summarizing or additional comment at the end of a sentence. For example:

How Is the Hashtag Used on Social Media?

On social media, hashtags are used to group messages on a specific topic. Searching for a specific hashtag shows every message tagged with it. A hashtag is a simple way for people to label and search for posts of interest to them and to keep up with the conversation. For example: By searching #BGT (the hashtag for the TV show Britain's Got Talent), a user can view all the other users' comments that have been appended with #BGT.

Unfortunately, popular hashtags are often hijacked by people trying to get their message in front of a large audience. For example:

Other Names for the Hashtag

Other names for the hashtag include (in our assessed order of popularity):

A hashtag is commonly called a hash. (This is believed to be a corruption of the word hatch, referring to cross hatching.)

The hashtag is commonly used to mean "number". (For example, Number 1 can be written #1.) This almost certainly derives from its use in early programming languages. (The term number sign is an internationally recognized name for the hashtag.)

The symbol for pound in weight is "lb" (from the Latin libra pondo). In the early days of printing, to avoid the lowercase "l" being confused with the number 1, a line was drawn across the "lb". Over time, this evolved into the hashtag. (In the US, the hashtag is still used to denote a pound in weight when it follows a number. For example, 4 pounds is written 4#.)

Shift 3 on your keyboard will either be a pound sign (Ł) or a hashtag (#). It all depends on which keyboard template you're using. In the past, printers linked to home computers would often erroneously print # instead of Ł (or vice versa). This is the root of why the hashtag is also called the pound key. (NB: This is not to be confused with the term pound sign, which has far earlier provenance and is based on a pound in weight.)

The term square sign is rarely used nowadays. It derives from an attempt to find a word for the symbol that appears in every language. While the idea was sound, the name never caught on (most probably because the symbol is not square!).

As the hashtag looks the same as the grid for the game Tic-Tac-Toe, it is often called the Tic-Tac-Toe sign.

In the UK, a hashtag is sometimes called the noughts and crosses sign. (NB: The game Tic-Tac-Toe is known as Noughts and Crosses in the UK.)

In musical notation, a hashtag is known as a sharp. It indicates a higher pitch.

The use of the hashtag symbol in telecommunications stems from the early 1960s when laboratories needed a key on the telephone keypad to enable telephones to communicate with computers. The term octothorpe was reportedly invented by engineers at Bell Labs in the USA. This term was used in preference to pound sign or number sign, which they felt would more likely be misinterpreted by telephone users, particularly when the term was translated into other languages. As a result, they created a brand new term whose meaning could not be misconstrued. (Octo derives from the Latin for eight. There is no consensus on the derivation of thorpe, but it may derive from the old Norse word for village, which later came to mean place.)

In May 2015, the Oxford University Press announced that hashtag was "the children's word of the year."

Do Not Confuse the Hashtag with the Sharp Sign