What Does 4EAE Mean?

4EAE means "Forever And Ever."

The abbreviation 4EAE is a cyber term used with the meaning ìForever And Everî. It is typically used to reinforce a declaration of love and usually accompanies other abbreviations such as LU ("Love You") and ILY ("I Love You").

4EAE is one of many abbreviations used to add emphasis to declarations of true love. Others include:

When I write 4EAE, I mean this: 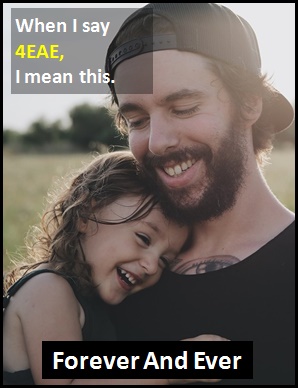 People fall in and out of love but, for parents, love lasts 4EAE.

Examples of 4EAE in Sentences

Here are examples of 4EAE being used in conversations:

An Academic Look at 4EAE

4EAE is classified as a cyber term as opposed to an initialism abbreviation or an acronym. Initially, cyber term terms were introduced for brevity but, particularly with the advent of predictive texting and on-screen keyboards, they are now mostly employed for fun. Cyber terms differ from icons because they are not pictorial representations.

4EAE is an adverbial phrase. Adverbial phrase is the term for two or more words which play the role of an adverb. An adverb is a word that describes a verb, an adjective or another adverb.

Before the digital era, we would have just said "Forever And Ever" instead of using 4EAE.Ý

Example of 4EAE Used in a Text

12 (Forever) AAF (Always And Forever) 5EVER (Longer Than Forever)