What Does A1 Mean?

The abbreviation A1 is widely used to indicate that something is of "Top Quality." The term A1 can be applied to almost anything, from a person's appearance or personality to the quality of a product or the standard of an action completed. (See examples below).

A1 probably comes from the school grading system, where A is the highest level. 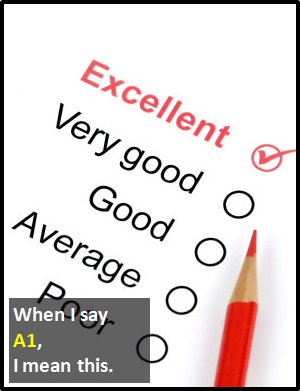 A1 indicates that something is "Top Quality."

Examples of A1 in Sentences

Here are some examples of A1 being used in sentences:

An Academic Look at A1

A1 is used as an adjective (i.e., a describing word). For example:

Example of A1 Used in a Text