What Does AFAIR Mean?

AFAIR means "As Far As I Remember." The abbreviation AFAIR is a common caveat used to indicate that the accuracy of a statement is dependent on the accuracy a memory.

Of note, AFAIR is sometimes expanded to "As Far As I Recall."

When I write AFAIR, I mean this: 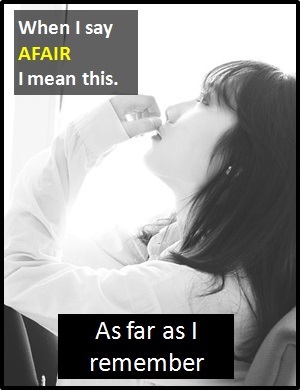 AFAIR declares that a statement's truth is reliant on an accurate memory.

Examples of AFAIR in Sentences

Here are examples of AFAIR being used in conversations:

An Academic Look at AFAIR

AFAIR can be classified as an adverb of condition with a meaning similar to "if I remember correctly."

Before the digital era, we would have just said "As Far As I Remember" instead of AFAIR.

Example of AFAIR Used in a Text