ANIMOJIs are customized animated emojis that use a user's own voice and facial expressions. They first appeared on the premium versions of the iPhone X, which was released in November 2017. Using the phone's 3D sensor and front-facing camera, users can create moving and talking versions of their favourite emojis which mimic their own expressions, including dogs that sing, monkeys that smile and piles of poop that squint!

Only twelve ANIMOJIs were available on first release. They were: alien, cat, chicken, dog, fox, monkey, panda, pig, poop, rabbit, robot and unicorn. iPhone ANIMOJOs were originally restricted to just 10 seconds in duration, but they can also be converted into stickers and pasted into messages.

When I write ANIMOJI, I mean this: 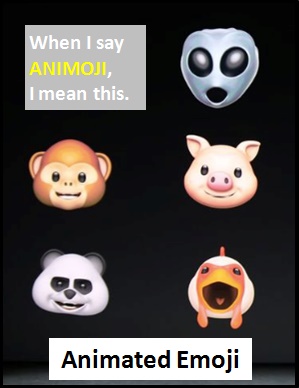 Examples of ANIMOJI in Sentences

Here are examples of ANIMOJI being used in conversations:

An Academic Look at ANIMOJI

Before the iPhone X was released, we would have just said "Animated Emoji" instead of using ANIMOJI.

Example of ANIMOJI Used in a Text