What Does AO Mean?

The abbreviation AO usually indicates that only people deemed to be adults may do something, such as buy a game or other product, attend an event, or view a movie.

With regards to gaming, AO is the highest rating awarded by the ESRB (Entertainment Software Rating Board). ESRB ratings provide information about what's in a game or app so parents and consumers can make informed choices about which games are right for their family. The AO rating indicates that a game may contain prolonged scenes of intense violence, graphic sexual content and/or gambling with real currency.

Of note, in a military context, AO means "Area of Operations."

When I write AO, I mean this: 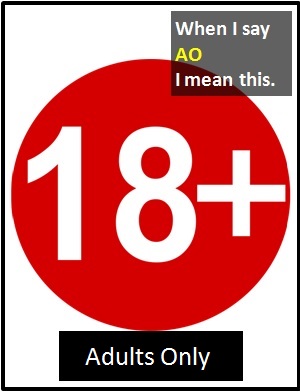 The abbreviation AO means adults only.

Examples of AO in Sentences

Here are examples of AO being used in conversations:

An Academic Look at AO

As it is pronounced using its individual letters (i.e., "Aay Oh"), the abbreviation AO is classified as an initialism abbreviation. Initialisms are different to acronyms, which are spoken like words.

The phrase "Adults Only" is used like an adjective. Adjectives are describing words which are used either before or after a noun (or a pronoun) to modify its meaning.

Before the digital era, we would have just said "Adults Only" instead of using the abbreviation AO.

Example of AO Used in a Text