What Does ASL Mean?

The abbreviation ASL is commonly used with the meanings "Age? Sex? Location?", "As Hell!", and "American Sign Language." Here is more information about ASL, with examples of use.

ASL is most commonly used in online chat and text messaging with the meaning "Age? Sex? Location?" to determine a person's key personal details. For example: Note: In this context, ASL is usually an innocent prelude to an appropriate conversation. However, as the answers to ASL could divulge potentially useful information to an internet predator or groomer, the parents of young children should be aware of what ASL means.

ASL is also used with the meaning "As Hell!" to add emphasis to an adjective (a describing word). For example:

ASL also means "American Sign Language." This is a complete, natural language that is used throughout the US and English-speaking regions of Canada. It is the primary language of many North Americans who are deaf or hard of hearing.

"As Hell!" is another common definition for ASL.

When I write ASL, I mean this: 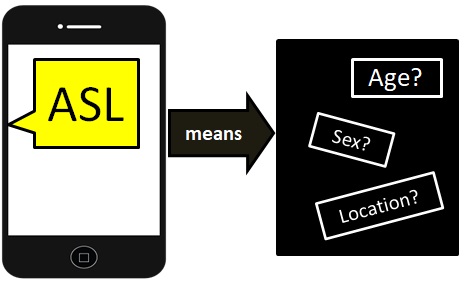 An Academic Look at ASL

When used with the meanings "Age, Sex Location?" and "American Sign Language," ASL is classified as an initialism abbreviation because it is pronounced using its individual letters (i.e., "Aye Ess Ell")

Even though in "Age, Sex Location?", each letter of ASL plays the role of an interrogative sentence (i.e., a question), it is commonly seen without a question mark. In other words, it can be written ASL? or ASL.

Example of ASL Used in a Text

ASL
Help Us To Improve Cyber Definitions
Please tell us using this form.