What Does AVGN Mean?

An AVGN (Angry Video Game Nerd) is a gamer who becomes frustrated by the video games they play.

AVGN is also the name of a vlogger on Youtube (formally known as the Angry Nintendo Nerd), who reviews retro computer games. He is known for his angry nerd face and use of profanity in his reviews.

When I write AVGN, I mean this: 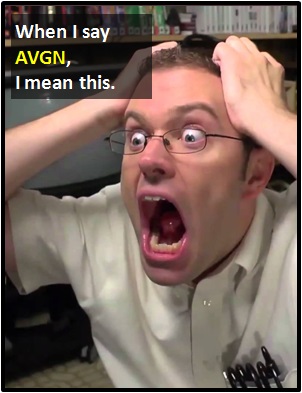 The image shows someone becoming angry while playing a video game.

Examples of AVGN in Sentences

Here are some examples of AVGN being used in sentences:

An Academic Look at AVGN

AVGN is an initialism abbreviation. This means it is pronounced using its individual letters. Initialisms contrast with acronyms, which are spoken like words. AVGN is typically used as a noun.

Example of AVGN Used in a Text