What Does AWW Mean?

AWW is an expression of approval or sympathy. It also means "Any Which Way."

Here is more information about each of these definitions of AWW, with examples of use.

Expression of Approval or Sympathy

AWW is an interjection used in speech, messaging and online to express approval of something cute or attractive (whether it is something that someone has said, or a particular animal or object). It is also used as an expression of sympathy. For example: AWW may be typed with any number of Ws, which may reflect the degree of sentiment felt by the sender. The minimally impressed or time conscious might be content with a simple AW. However, for those who are genuinely touched or who are more open to expressions of emotion, even AWWWWWWWWWWWWWWWW might not be enough.

As an abbreviation, AWW means "Any Which Way" (i.e., carelessly, haphazardly, or by any means). For example: In the last example, AWW is similar in meaning to the abbreviation BAMN (By Any Means Necessary).

When I write AWW, I mean this: 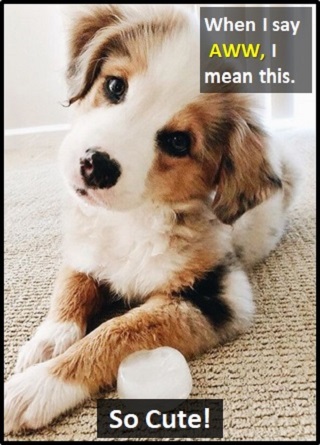 AWW is usually an expression of approval or sympathy. It can also mean "Any Which Way."

"Any Which Way" is another definition for AWW.

An Academic Look at AWW

AWW is typically used as an interjection. Interjections are words used to express feeling or sudden emotion. They can be standalone or used as part of a sentence (usually at the start). An interjection can end in an exclamation mark to express a particularly strong feeling or emotion.

When used to mean "Any Which Way," AWW is an initialism abbreviation. Technically, this means it is pronounced using its individual letters (i.e., Ay Dublyoo Dublyoo).

Initialisms are different to acronyms, which are abbreviations spoken like words.

The use of AWW as an expression of approval or sympathy long pre-dates the digital era.

Example of AWW Used in a Text