What Does B4 Mean?

The actual meaning of B4 will be determined by the context in which it is used.

Of note, B4 can refer to vitamin B4, also known as Adenine, which is one of the eight vitamins that belong to the B-complex of vitamins. 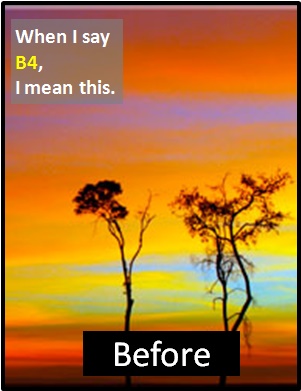 The night sky, just B4 dawn.

Examples of B4 in Sentences

Here are examples of B4 being used in jokes:

An Academic Look at B4

B4 is defined as a cyber term because some of its characters are used as substitutes for letters. Most cyber terms were introduced to reduce the number of key strokes required to write a word or phrase, but since the arrival of predictive texting and keyboards on mobile devices, this efficiency is no longer required. Nevertheless, cyber terms are still regularly used to make messages more entertaining or to express individuality.

Cyber terms differ from icons because they are not pictorial representations.

Before the digital era, we would have just written "before" or something like "prior to" or "in preference to" instead of using B4.

Example of B4 Used in a Text

B4U (before you) DBD (death before dishonour) IBTD (in before the delete) IBTL (in before the lock) LBW (leg before wicket) NHTB (never heard that before) PMIGBOM (put mind in gear, before opening mouth!) WNOHGB (where no one has gone before)