What Does BBG Mean?

The abbreviation BBG is used with a number of meanings, including "Better Be Going," "Beautiful Baby Girl," and "Bikini Body Guide." Here's more information about each of these definitions of BBG.

BBG is most commonly used with the meaning "Better Be Going" to end a text chat. The use of BBG indicates that the sender has other things to do and doesn't have time for further chat. Whilst BBG implies that the sender is leaving the chat reluctantly, it is actually often used as a diplomatic way of ending a conversation that has dragged on for too long.

BBG is also used with the meaning "Beautiful Baby Girl." In this context BBG is not typically used to refer to an actual female infant, but more (by men) in admiration of a particularly attractive girl or woman or, (by women or girls) in appreciation of a female friend.

Men should take special care when using BBG as, in many contexts, its use could be seen as condescending or sexist.

BBG also stands for "Bikini Body Guides." The BBG are physical training programs for women, created by trainer Kayla Itsines. Many of the BBG workouts are available for free on YouTube.

When I write BBG, I mean this: 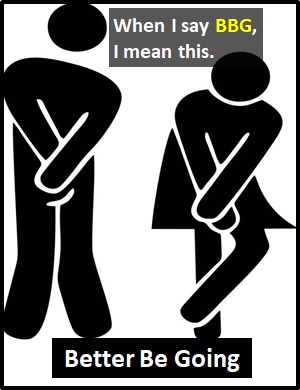 "Beautiful Baby Girl" is another common definition for BBG.

Examples of BBG in Sentences

Here are examples of BBG being used in conversations:


(Here, BBG is being used with the meaning "Better Be Going" and Jenny is probably using it to escape from Kal's monologue!)


(Here, BBG is being used with the meaning "Beautiful Baby Girl.")


(Here, BBG is being used with the meaning "Bikini Body Guide.")

An Academic Look at BBG

BBG is an initialism abbreviation. This means it is pronounced using its individual letters (i.e., Bee Bee Gee). Initialisms contrast with acronyms, which are spoken like words.

When used to mean "Better Be Going," BBG is used a declarative sentence (i.e., a statement). It is not normally used as another part of speech within a wider sentence.

Before the digital era, we might have said something like "I really must skedaddle" instead of using BBG to mean "Better Be Going."

Example of BBG Used in a Text