BETA (pronounced "beeta") is widely used to refer to a prototype of a program, mobile app or game which is considered ready for release. BETA versions are distributed to a limited number of users for testing in a real-world environment in order to check for bugs and glitches before general release.

BETA is also used as an abbreviation for the word "Better," as in "superior to" or "recovered from."

Examples of BETA in Sentences

Here are examples of BETA being used in conversations:

When I write BETA, I mean this: 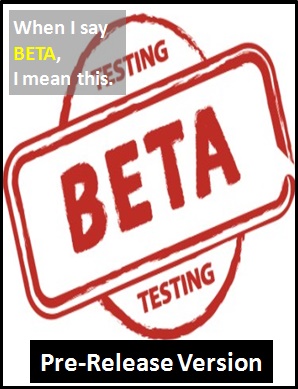 An Academic Look at BETA

When used to mean "Pre-Release Version," BETA is normally used an adjective, i.e., a describing word. However, when used as an abbreviation for the word "Better," BETA can be an adjective or adverb. For example:

Example of BETA Used in a Text