BFA means "Best Friends Always." The abbreviation BFA is typically used as a term of endearment between young girls. BFA implies that the sender considers the recipient to be one of their most special friends. The use of BFA does not exclude the possibility that the sender has other friends that are considered equally special.

A best friend is someone: A best friend can be a partner. It is not usually a blood family member. (However, some people often consider one of their parents or siblings to be a best friend.)

Of note, BFA also stands for "Bachelor of Fine Arts". This is the standard degree awarded for an undergraduate course or program in the visual or performing arts.

When I write BFA, I mean this: 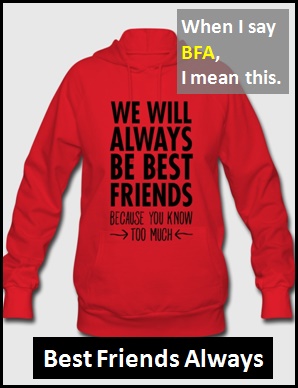 A BFA is someone you can (or need to) trust.

Examples of BFA in Sentences

Here are examples of BFA being used in conversations:

An Academic Look at BFA

The abbreviation BFA is used as a noun. When the term is expanded, it is a noun phrase headed by the common noun Friend. (The words Best and Always modify Friend.)

BFA is also an initialism abbreviation. This means it is pronounced using its individual letters (i.e., "Bee Eff Ay"). Initialisms contrast with acronyms, which are spoken like words.

Before the digital era, we would have just said something like "Best Friend Always" or "Best Friend Forever" instead of using BFA.

Example of BFA Used in a Text

BFA
Help Us To Improve Cyber Definitions
Please tell us using this form.