What Does BGT Mean?

BGT (Britain's Got Talent) is a British television talent-show competition which started in June 2007. Throughout the show, contestants can perform whatever act they like in front of four celebrity judges. The contestants' aim is proceed past the audition stage to semi-finals week, which is shown live on television and judged by the public vote. Semi-finals week culminates in the live final, which is usually shown on a Saturday night. The winner is given a cash prize and the opportunity to perform at the Royal Variety Performance in front of members of the British Royal Family.

When I write BGT, I mean this: 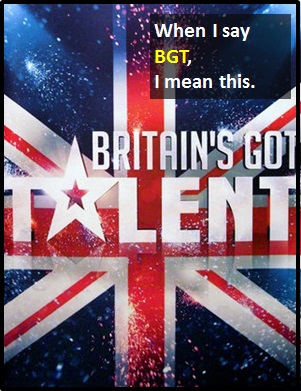 BGT (Britain's Got Talent) is a British television talent-show competition which started in June 2007.

Example of BGT in a Sentence

Here is an example of BGT being used in a conversation:

An Academic Look at BGT

BGT is an initialism abbreviation. Technically, this means it is pronounced using its individual letters (i.e., Bee Gee Tee), but as this is less intuitive to say than "Britain's Got Talent," it is not often said using its letters. In other words, the abbreviation BGT is for efficiency in writing and not efficiency in speech.

Example of BGT Used in a Text