What Does BLACKFISHING Mean?

According to NBC, the term BLACKFISHING first came to prominence in 2018, when it was used in a Twitter thread by journalist Wanna Thompson. In the thread, Thompson criticized White celebrities who had used makeup, Photoshop, and cosmetic surgery to appear Black.

Critics have compared BLACKFISHING to blackface (the practice of a non-Black person dressing up as Black person), saying it is an appropriation of Black culture.

In October 2021, former Little Mix member Jesy Nelson was accused of BLACKFISHING, for her appearance in the video for her new song "Boyz," a collaboration with rapper Nicki Minaj.

You now know what BLACKFISHING means, but are you good at Cyber Speak? Well, let's see!

When I write BLACKFISHING, I mean this: 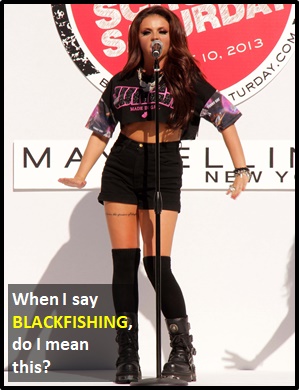 Jesy Nelson is one of many celebrities who have been accused of BLACKFISHING.

Example of BLACKFISHING Used in a Text