What Does BNIB Mean?

BNIB (Brand New In Box) is most commonly seen on sites such as eBay and Gumtree or in classified advertisements in newspapers. BNIB describes an item for sale (usually an electrical item) that has never been used and still has its original packaging.

BNIB contrasts with BNWOT (Brand New Without Tags), which denotes that the item (usually a piece of clothing) is new but has had its labels removed. BNIB is similar to BNWT (Brand New With Tags).

Be aware that the threshold for what is described as "BNIB" is dropping at pace. Nowadays, BNIB often just means "as good as new and I have the original box." To differentiate between something brand new and something as good as new, other abbreviations have emerged. For example:

When I write BNIB, I mean this: 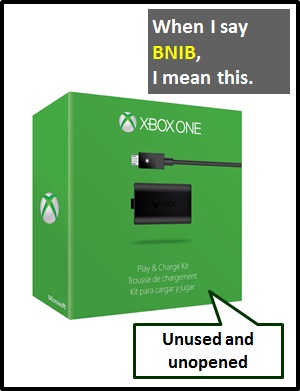 Sometimes, BNIB might mean "fairly new and still in its original box." However, BNIB is meant to mean "unopened and unused."

Examples of BNIB in Sentences

Here is an example of BNIB being used in an advertisement:

An Academic Look at BNIB

BNIB is typically used as an adjective (i.e., a describing word). Of note, BNIB is an initialism abbreviation. This means it is pronounced using its individual letters (i.e., Bee En Aye Bee). (Of note, initialisms contrast with acronyms, which are spoken like words.)

Before the digital era, we might have said something like "unused and still in its box" instead of BNIB.

Example of BNIB Used in a Text