What Does BRE Mean?

The abbreviation BRE is typically used online by fans of the rapper and actress "Bre-Z" or the hip-hop artist "2'Live Bre" to search for their songs and videos. Here's a little more information about each artist.

Calesha "Bre-Z" Murray is an actress and rapper, born in Philadelphia, Pennsylvania. She is best known for her roles as Tamia "Coop" Cooper in the American drama series All American, and as Freda Gatz in Empire.

Here's "Bre-Z" performing her single "Left Right Back," which was released in February 2020.

Hip-hop artist "2'Live Bre" hails from Nashville, Tennessee. His music is a mixture of hip-hop, rap and pop. "2'Live Bre" received a NIMA award for Best Hip Hop Artist of 2018. In May 2019, he signed with Boulevard Records.

Check out "2'Live Bre" in this video with "Londynn B." (WARNING - EXPLICIT LYRICS.)

When I write BRE, I mean this: 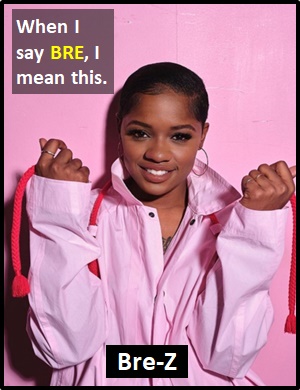 "2'Live Bre" is another common definition for BRE.

Example of BRE Used in a Text