The term BROFLAKE is used as an insult with the meaning "Hypersensitive White Male." It refers to any (typically young) white man (i.e., BRO) who is easily offended. In particular, BROFLAKE is used for people who are easily upset by any level of failing to adhere to the social reform associated with liberalism.

BROFLAKE is related to the term SNOWFLAKE, which is an insult aimed at those of a "progressive" political leaning.

BROFLAKE sometimes refers to a friend who has "flaked" (i.e., failed to follow through on a commitment).

When I write BROFLAKE, I mean this: 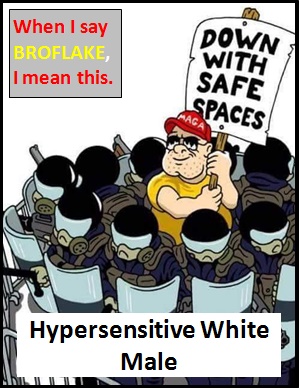 Examples of BROFLAKE in Sentences

Here are examples of BROFLAKE being used in conversations:

An Academic Look at BROFLAKE

Before the digital era, we might have said something like "Sissy" or "Hypersensitive" instead of using BROFLAKE to refer to a "Hypersensitive White Male."

Example of BROFLAKE Used in a Text