What Does BSF Mean?

BSF means "Best Friend" most of the time, but it can also mean "Best Sister Friend" or "But Seriously Folks." Here is a brief explanation of each meaning:

Other Meanings for BSF

BSF has other meanings too:

(The Border Security Force is the primary border defence organisation of India.) (Bible Study Fellowship is a fellowship offering a system of structured bible study.) (The British Softball Federation is the national governing body of softball within the United Kingdom.) (BsF: Venezuelan currency)

When I write BSF, I could mean this: 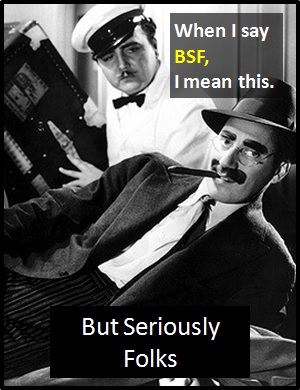 "Best Sister Friend" is also a common definition for BSF.

"But Seriously Folks" is another common definition for BSF.

Examples of BSF in Sentences

Here are examples of BSF being used in conversations:

An Academic Look at BSF

As it is pronounced using its individual letters (i.e., "Bee Ess Eff"), BSF is classified as an initialism abbreviation. Initialisms are different to acronyms, which are spoken like words.

Example of BSF Used in a Text