What Does CAP Mean?

CAP means "Lie" and "Bullet." The term CAP describes a lie. On social media (mainly TikTok and Instagram) no cap means no lie. The phrase has transformed and is often seen written in comments with the "no" dropped. If a user says "cap" or uses the emoji of a cap, they are calling something out as untrue.

When I write CAP, I mean this: 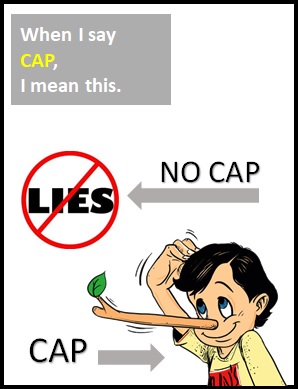 "Bullet" is another common definition for CAP. Adults

Examples of CAP in Sentences

Here are examples of CAP being used in conversations:

An Academic Look at CAP

CAP can be used as either a verb (i.e. a doing word) or a noun (an object). For example:

Example of CAP Used in a Text