What Does COS Mean?

COS means "Because." The abbreviation COS is a short form of the conjunction "because." It can also be written as COZ.

COS can also refer to:

When I write COS, I mean this: 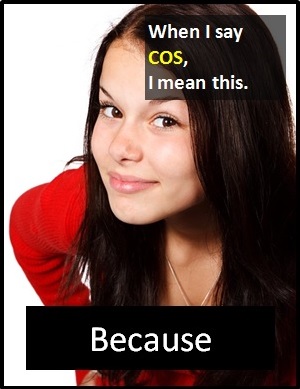 COS is short for "Because."

Examples of COS in Sentences

Here are examples of COS being used in conversations:

An Academic Look at COS

COS is a shortened version of because and is therefore a contraction. Contractions tend to be formed in one of three ways: For reasons of brevity, contractions are rarely followed by periods/full stops and apostrophes are routinely omitted in text speak and on social-media platforms.

Before the digital era, we would have written "because" or possible "'cause" instead of COS.

Example of COS Used in a Text