What Does DED Mean?

The abbreviation DED usually means "Dead." It is also the name of an American Fresh Metal band and of the YouTube Channel of Victor Paul Calderon, a Mexican/American vlogger. In government, DED stands for "Department of Economic Development."

Here's a little more information about each of these definitions of DED.

The abbreviation DED is widely used in text messaging and online chat as a deliberate misspelling of the word "Dead." It is typically used to indicate that the sender finds something so outrageously funny that they are unable to stop laughing and are metaphorically "Dead." In this context, DED can also be used sarcastically, to indicate that the sender does not find something funny, or to indicate regret, embarrassment or disappointment (similar to phrases such as "I wish I was dead," "I'm so embarrassed," or "I'm gutted").

DED is also the name of a Fresh Metal band out of Phoenix Arizona. DED have enjoyed some success since the release of their debut album in 2017. Here's a video of their 2020 hit, A Mannequin Idol.

DED is the name used by Mexican/American Vlogger Victor Paul Calderon, an online gamer who gained popularity for his gameplay highlight videos, as well as the vlog entries and fan interaction videos on his self-titled,Spanish-language YouTube channel.

In certain governments, the abbreviation DED is used with the meaning "Department of Economic Development."

When I write DED, I mean this: 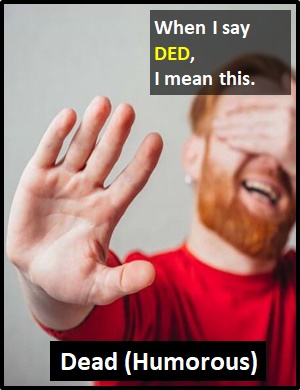 DED is also the name of an American Fresh Metal Band and a YouTube Channel. It also stands for "Department of Economic Development."

DED is also the name of an American Fresh Metal Band.

DED is also the name of a YouTube Channel.

"Department of Economic Development" is another definition for DED.

Examples of DED in Sentences

Here are examples of DED being used in conversations, with the meaning "Dead":


(Here, DED is being used to indicate embarrassment.)


(Here, DED is being used sarcastically.)

An Academic Look at DED

When used with the meaning "Dead," DED is a deliberate misspelling of the word. It is typically used as a slang word. Slang refers to words, phrases and uses of language that are regarded as very informal and which are often restricted to a special context or a particular group of users.

When used with the meaning "Department of Economic Development," DED is classified as an initialism abbreviation, as it is pronounced using its individual letters (i.e., "Dee Ee Dee"). Initialisms are different to acronyms, which are spoken like words.

Example of DED Used in a Text