What Does DEFO Mean?

DEFO is an abbreviation of the word "Definitely." It is also the nickname of American football defensive tackle "DeForest Buckner." Here is more information about each of these definitions of DEFO.

DEFO is widely used as an abbreviation of the word "Definitely." It is a slang word, typically used to show enthusiastic agreement with something that another person has said or suggested.

DEFO is one of many ways of abbreviating the word "Definitely." Others include:

DEFO is also a nickname of American football defensive tackle "DeForest Buckner." DEFO played college football at the University of Oregon. In 2016, he was selected by the San Francisco 49ers in the first round of the NFL Draft. In March 2020, the 49ers traded DEFO to the Indianapolis Colts.

When I write DEFO, I mean this: 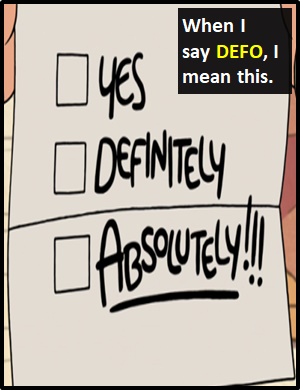 DEFO expresses enthusiastic agreement. It is also a nickname of "DeForest Buckner."

"DeForest Buckner" is a common definition for DEFO amongst fans of American Football.

Examples of DEFO in Sentences

Here are examples of DEFO being used in conversations:

An Academic Look at DEFO

When used with the meaning "Definitely," DEFO is a slang word. Slang refers to words, phrases and uses of language that are regarded as very informal and which are often restricted to a special context or a particular group of users.

When used to refer to "DeForest Buckner," DEFO is a nickname. Nicknames are substitutes for the proper name of a familiar person, place or thing. Nicknames usually express affection, but can also be used to tease or ridicule the recipient. As is the case with DeForest Buckner, nicknames for people are often shortened forms of first names or surnames. They are also often based on the subjects physical characteristics, origin or interests.

The use of DEFO to mean "Definitely" long pre-dates the digital era.

Example of DEFO Used in a Text