What Does DF Mean?

The abbreviation DF is widely used online with the meaning "Da F*ck" (i.e., "What The F*ck"), as an expression of surprise or irritation. (See examples below.)

DF and "Da F*ck" are further abbreviations of WTF ("What The F*ck?"). The word "What" is omitted altogether and the word "The" is replaced by the letter "D".

When I write DF, I mean this: 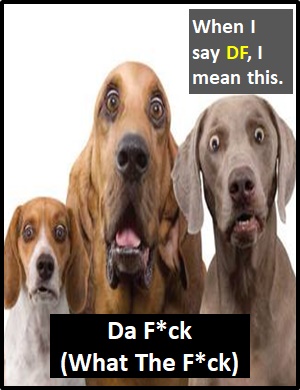 On online dating sites, such as Craigslist, Tinder, Zoosk and Match.com, as well as in texts and on adult chat forums, DF also means "Disease Free" or "Drug Free."

Examples of DF in Sentences

Here are examples of DF being used in conversations:

An Academic Look at WTF

As it is pronounced using its individual letters (i.e., "Dee Eff"), DF is classified as an initialism abbreviation. Initialisms are different to acronyms, which are spoken like words.

When used with the meaning "Da F*ck," DF is typically used an interjection. An interjection is included in a sentence to express a sentiment such as surprise or irritation (as well as disgust, joy, excitement, or enthusiasm).

DF also often plays the role of an interrogative sentence (i.e., a question). However, even when used as a question, it is commonly seen without a question mark (i.e., it can be written "DRF?" or "DF").

Before the digital era, we might have just said "Da F*ck" or "What The F*ck?" instead of using DF.

Example of DF Used in a Text