What Does FASHO Mean?

FASHO means "For Sure."

The term FASHO is an abbreviation of the expression "For Sure." It is used to show agreement (i.e., to say 'yes').

FASHO may sometimes be considered an emphatic way of saying 'yes' (similar to HY (Hell Yes)), but is often just used as a 'cool' way of indicating agreement (more like YEP (Yes)).

FASHO is one of many ways of abbreviating the term "For Sure." Others include 4SHO, FOSHIZZLE and FOSHO.

When I write FASHO, I mean this: 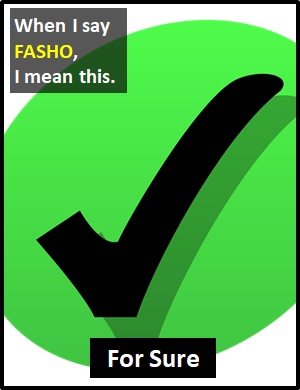 Examples of FASHO in Sentences

Here are examples of FASHO being used in conversations:

An Academic Look at FASHO

FASHO is a slang word. Slang refers to words, phrases and uses of language that are regarded as very informal and which are often restricted to a special context or a particular group of users.

FASHO can also be considered a neologism (i.e., a newly coined word or term which has emerged into everyday usage). Some neologisms are formally accepted into mainstream language (at which point, they cease to be neologisms), and some wither until they can longer be considered everyday terms. A neologism can be:

Before the digital era, we would have just said "For Sure," instead of typing FASHO.

Example of FASHO Used in a Text