What Does FTTB Mean?

FTTB means "For the Time Being." The abbreviation FTTB is used in text speak to mean "For The Time Being," in the sense of temporarily or for the moment. FTB indicates that a situation or agreement will exist until another arrangement is made at some unspecified time in the future.

When I write FTTB, I mean this: 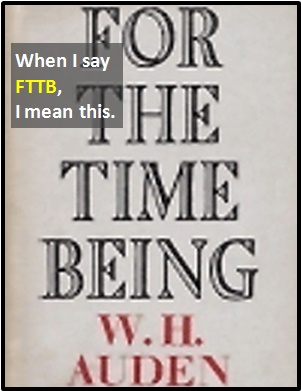 For The Time Being, is a poem and a book by W H Auden.

Examples of FTTB in Sentences

Here are examples of FTTB being used in statements:

An Academic Look at FTTB

The abbreviation FTTB is a prepositional phrase (the preposition is for), which is used as an adverb to establish the setting for the main clause.

FTTB is an initialism abbreviation. Technically, this means it is pronounced using its individual letters (i.e., Eff Tee Tee Bee), but as this is harder to say than "For The Time Being," it is not often uttered using its letters. In other words, the abbreviation FTTB is for efficiency in writing and not efficiency in speech.

Before the digital era, we would have just said something like, "for now" or "at the moment" instead of using the abbreviation FTTB.

Example of FTTB Used in a Text