What Does FWIW Mean?

FWIW means "For What It's Worth." The abbreviation FWIW is typically used to preface a comment without making a claim as to its importance or validity.

The use of FWIW indicates that the sender does not know whether the information they are giving is useful or not. It is typically used in a conciliatory way. However, it is also often used in a false self-deprecating way, when the speaker is presenting unsolicited advice.

Of note, "For What It's Worth" is also the title of a protest song written by Stephen Stills and released by Buffalo Springfield in 1967.

When I write FWIW, I mean this: 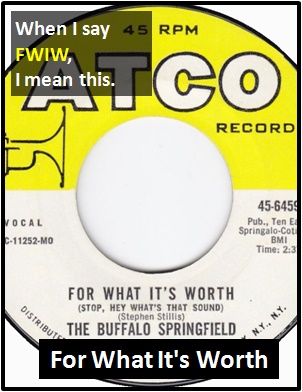 For What It's Worth was a hit for Buffalo Springfield.

Examples of FWIW in Sentences

Here are examples of FWIW being used in conversations:

An Academic Look at FWIW

The abbreviation FWIW is a prepositional phrase (the preposition is for), which is used as an adverb to establish the setting for the main clause.

FWIW is an initialism abbreviation. Technically, this means it is pronounced using its individual letters (i.e., Eff Dbl-Yoo Eye Dbl-Yoo), but as this is harder to say than "For What It's Worth" it is not often uttered using its letters. In other words, the abbreviation FWIW is for efficiency in writing and not efficiency in speech.

Before the digital era, we would have just said something like, "in my opinion" or "for what it's worth" instead of using the abbreviation FWIW.

Example of FWIW Used in a Text