What Does G8 Mean?

G8 means "Great." It is a shortened version of GR8 (Great). Of note, G8 is almost never used to mean gate (as in a garden gate).

Of interest, the term GR8 (Great) gave rise to the term GR9 (Really great) (i.e., one better than GR8), but this has not yet happened with G9, which means "Good Night." 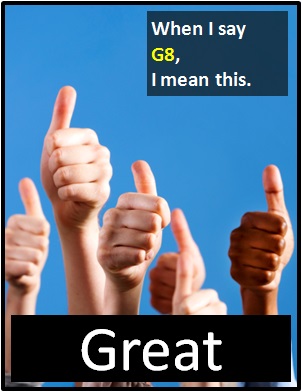 G8 is a shortened version of GR8.

Examples of G8 in Sentences

Here are examples of G8 being used in conversations:

An Academic Look at G8

G8 is typically used as an adjective. As it includes both a letter and number, G8 is not an acronym or an abbreviation but a cyber term. Originally, cyber term terms were introduced for brevity, but, particularly with the advent of predictive texts, they are now mostly employed for fun.

Before the digital era, we would have just said "great" or "terrific" instead of G8.

Example of G8 Used in a Text