What Does GAL Mean?

GAL means "Girl" and "Get a Life." Here is more information about each of these definitions of GAL, with examples of use.

The term gal is widely used as a slang term for "girl." It is believed to have originated in London, England, in the 18th century.

Gal is similar in use and meaning to gyal. It is also the root of the term galdem, which means a gang or group of girls.

GAL is also an abbreviation of the phrase "Get A Life." In this context, GAL is used as an imperative to tell someone to stop being boring, mind their own business, or stop being annoying. For example:

When I write GAL, I mean this: 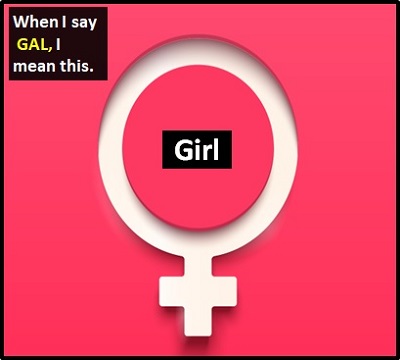 GAL also means "Get A Life."

"Get a Life" is another common definition for GAL.

An Academic Look at GAL

When used with the meaning "girl," gal is a slang word. Slang refers to words, phrases and uses of language that are regarded as very informal and which are often restricted to a special context or a particular group of users.

When used with the meaning "Get A Life," GAL is an initialism abbreviation. This means it is pronounced using its individual letters (i.e., Gee Aye Ell).

In this context, GAL is typically used as an imperative (i.e., an order). It can be followed by a period (full stop) or an exclamation mark, depending on the forcefulness of the command. However, for purposes of brevity in text-based messaging, punctuation such as exclamation marks, question marks, and even periods are often omitted.

Example of GAL Used in a Text

ALIHAL (at least I have a life) GAC (get a clue, global assembly cache, guilty as charged) GAFM (get away from me) GAJ (get a job) GYALDEM (group of girls) GYAT (exclamation of admiration or appreciation, get your act together) HANL (have a nice life)