What Does GMAB Mean?

GMAB means "Give Me A Break."

The abbreviation GMAB is typically used with the meaning "Give Me A Break" to convey disbelief or exasperation. GMAB is often used in protest, as a response to what is perceived to be an unreasonable request or order. It can also convery genuine disbelief.

GMAB is often expressed as "Gimme A Break."

"Give Me a Break" is a song by the American vocal group The Ritchie Family, first released as a single in 1980.

When I write GMAB, I mean this: 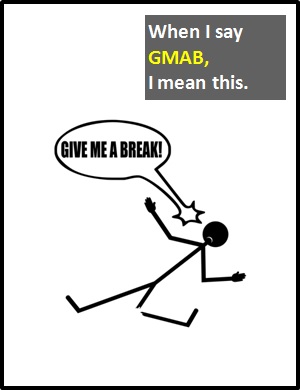 GMAB is used to express disbelief or exasperation.

Examples of GMAB in Sentences

Here are examples of GMAB being used in conversations:

(Here, GMAB is being used in protest.)

(Here, GMAB is being used to express increduility.)

An Academic Look at GMAB

GMAB is typically used as an imperative (i.e., an order). It can also be used as an interjection. An interjection is not grammatically related to any other part of the sentence. It is included in a sentence (usually at the start) to express a sentiment such as surprise, disgust, joy, excitement, or enthusiasm.

Before the digital era, we might have said something like "No way!" or "Get off my back!" instead of using GMAB.

Example of GMAB Used in a Text