What Does GON Mean?

The abbreviation GON is principally used with the meaning "Go On" as a way of encouraging someone to continue talking or writing about something.

GON is also often used to mean "Gonna," a slang term that is an informal way of saying or writing "Going To." "Gonna" is widely used not only in text based conversations, but also in contemporary fiction, films and song lyrics (e.g., the tagline for the film Ghostbusters (1984), was "Who you gonna call? Ghostbusters!")

Similar contractions to "Gonna" include, "Shoulda," "Woulda," and "Coulda," all of which have been widely used in song lyrics since as early as the 1930s.

The abbreviation GON can also be used with the meaning "Gone," as in "Departed" or "Used Up."

When I write GON, I mean this: 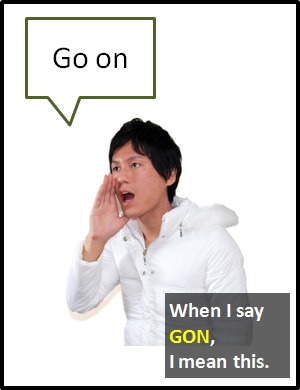 GON can be an encouragement to carry on.

Examples of GON in Sentences

Here are examples of GON being used in conversations:

An Academic Look at GON

When used to mean "Go On," GON is typically used as an imperative (i.e., an order).

When used to mean "Gonna," GON is a verb (i.e., a doing word) with the meaning "somebody is going to do something."

When used to mean "Gone," GON is the past participle of the verb "to go" and is also an adverb, meaning something or someone is no longer present.

Before the digital era, we might have said something like "please continue," "going to," or "all gone" instead of using GON.

Example of GON Used in a Text