What Does GTH Mean?

GTH means "Go To Hell." The abbreviation GTH is used as an order. It is typically used as an insult, but it can also be used in a light-hearted way between friends.

When I write GTH, I mean this: 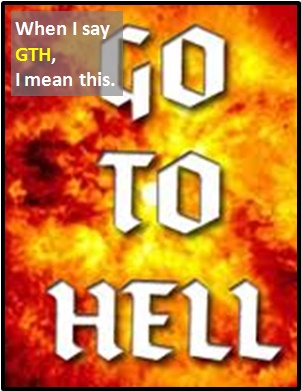 GTH is often used as a friendly insult.

Examples of GTH in Sentences

Here are examples of GTH, with the meaning "Go To Hell," being used in conversations:

An Academic Look at GTH

Although technically an interrogative sentence, GTH is used like an interjection. An interjection is not grammatically related to any other part of the sentence. It is included in a sentence (usually at the start) to express a sentiment such as surprise, disgust, joy, excitement, or enthusiasm. In formal writing, interjections are offset from the surrounding words with commas.

Before the digital era, we would have just said "Go To Hell" instead of using the abbreviation GTH.

Example of GTH Used in a Text