What Does GYPO Mean?

The term GYPO is widely used as an abbreviation of the word "Gypsy." It was originally used as a derogatory term to refer to someone from the traveling community (e.g., Romani travelers, Irish travelers, gypsies), but is now more widely used as a common insult throughout the English-speaking world, particularly in the UK.

In this context, GYPO is similar to PIKEY, which originally referred to Irish gypsies, but is now also widely used as an insult.

In 2010, Colombian singer-songwriter Shakira had an international hit with a song called "Gypsy."

Here's a 2015 tribute to GYPO loggers from Buzz Martin:

When I write GYPO, I mean this: 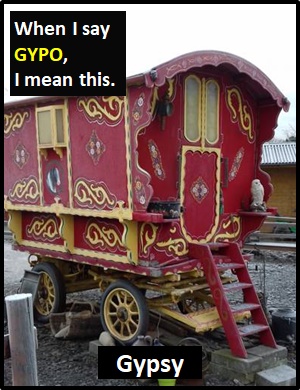 In the Pacific Northwest, "Independent Logger" is another common definition for GYPO.

Examples of GYPO in Sentences

Here are examples of GYPO being used in conversations:


(Here, GYPO probably means "Gypsy" and is being used as a derogatory term.)


(Here, GYPO means "Gypsy" and is being used as a derogatory term.)

An Academic Look at GYPO

GYPO is a slang word. Slang refers to words, phrases and uses of language that are regarded as very informal and which are often restricted to a special context or a particular group of users.

The use of GYPO to mean "Gypsy" or to refer to independent loggers, long pre-dates the digital era.

Example of GYPO Used in a Text