What Does HF Mean?

The abbreviation HF means "Have Fun," "Head F*ck" and "High Frequency." Here is more information about each of these definitions of HF, together with examples of use.

HF is often used in text messaging with the meaning "Have Fun." In this context, it is typically used at the end of a conversation as a way of wishing the recipient all the best in an activity or an endeavor that they are about to undertake.

On gaming platforms such as Discord, HF is often combined with GL to form the abbreviation GLHF (Good Luck, Have Fun), which is typically used as an expression of goodwill to an opponent before a game starts. For example:

When used with the meaning "Head F*ck," HF refers to an idea, concept or circumstance that is beyond your understanding. For example:

When used with the meaning "High Frequency," HF refers to the range of radio waves between 3 and 30 megahertz.

When I write HF, I mean this: 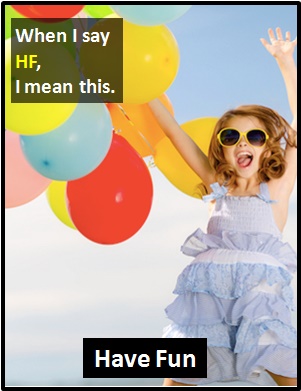 "Have Fun" is the most common definition for HF in gaming related communications on apps such as Discord, TeamSpeak and Telegram, as well as on Snapchat, WhatsApp, Facebook, Twitter, and Instagram.

"Head F*ck" is another definition for HF.

An Academic Look at HF

When used with the meaning "Have Fun" the abbreviation HF is used as a standalone declarative sentence (i.e., a statement). In other words, it is not normally used as another part of speech within a wider sentence.

Before the digital era, we would have just said "All The Best" or "Have Fun" instead of using the abbreviation HF.

Example of HF Used in a Text