What Does ICO Mean?

The acronym ICO is a cryptocurrency term used with the meaning "Initial Coin Offering" to refer to a crowdfunding mechanism by which some start-up companies raise capital.

A proportion of a crowdfunded cryptocurrency is allocated to investors in the form of "tokens," in exchange for legal tender or other cryptocurrencies. These tokens become functional units of currency when the ICO's funding goal is met and the project launches.

ICOs contrast with IEOs, which are administered by a cryptocurrency exchange.

When I write ICO, I mean this: 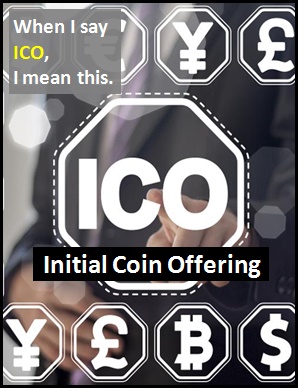 ICOs are a crowdfunding mechanism.

Examples of ICO in Sentences

Here are examples of ICO being used in conversations:

An Academic Look at ICO

ICO is an acronym (i.e., an abbreviation spoken like a word). Acronyms differ from initialism abbreviations, which are pronounced using their individual letters.

Example of ICO Used in a Text