The 1995 American film "Tommy Boy" featured the line: "I know where you live and I've seen where you sleep. I swear to everything holy that your mothers will cry when they see what I've done to you."

When I write IKWYL, I mean this: 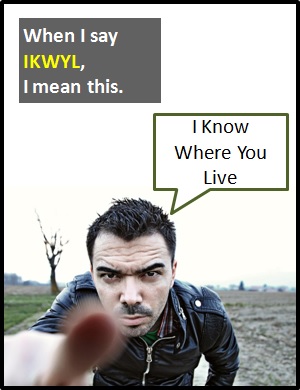 IKWYL is often a menacing statement.

Examples of IKWYL in Sentences

Here are examples of IKWYL being used in conversations:

An Academic Look at IKWYL

IKWYL is an initialism abbreviation. Technically, this means it is pronounced using its individual letters (i.e., "Eye Kay Dblyoo Why El"). However, it not spoken using its letters.

IKWYL is an abbreviated sentence, usually delivered with menace.

Before the digital era, we would have just said "I Know Where You Live" instead of using the abbreviation IKWYL.

Example of IKWYL Used in a Text