The abbreviation KIRF is an acronym used with the meaning "Keeping It Real Fake" to describe clones or copies of popular digital devices, such as smart phones. The origins of KIRF are unclear, but the tech blog “Engadget” is widely credited with popularizing the term.

When I write KIRF, I mean this: 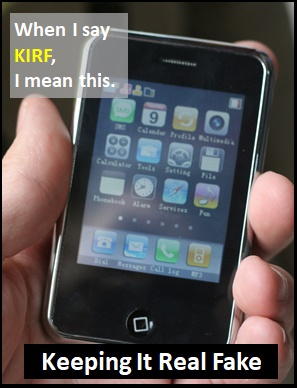 A good KIRF can be difficult to tell from the real thing.

Examples of KIRF in Sentences

Here are examples of KIRF being used in conversations:

An Academic Look at KIRF

KIRF is an acronym (i.e., an abbreviation spoken like a word). Acronyms differ from initialism abbreviations, which are pronounced using their individual letters.

KIRF is an abbreviation of the phrase "Keeping It Real Fake" that is used as a slang term. Slang refers to words, phrases and uses of language that are regarded as very informal and which are often restricted to a special context or a particular group of users.

KIRF can be used as both a noun and an adjective. For example:

(Here, KIRF is being used as a noun.)

(Here, KIRF is being used as a verb.)

Before the digital area, we might have said something like “Counterfeit” or “Knock Off” instead of using KIRF to refer to copied or cloned goods.

Example of KIRF Used in a Text