LYMYWY means "Love You, Miss You, Want You." The abbreviation LYMYWY is a short form of the sentence "I love you, I miss you and I want you." It is used between two people who have strong feelings for each other and are suffering the pain of separation. The combination of the verbs "miss," "love," and "want" in one sentence makes it clear that the emotions being expressed are intense.

When I write LYMYWY, I mean this: 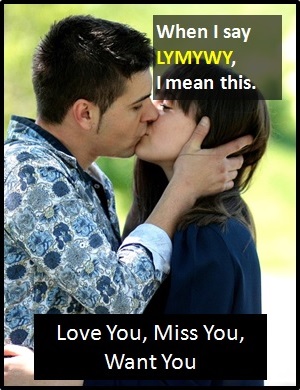 LYMYWY is an intense way of expressing feelings of love.

Examples of LYMYWY in Sentences

Here are examples of LYMYWY being used in conversations:

An Academic Look at LYMYWY

LYMYWY is an abbreviation of the phrase "I love you, I miss you and I want you." LYMYWY is typically used as a standalone declarative sentence (i.e., a statement). It is not often used as another part of speech within a wider sentence.

Before the digital era, we might have said something like "I love and miss you so much" or "I am dying to see you" instead of using the abbreviation LYMYWY.

Example of LYMYWY Used in a Text

LYMYWY
Help Us To Improve Cyber Definitions
Please tell us using this form.

LUMU (Love You Miss You) LYMY (Love You, Miss You) MULU (Miss You, Love You) TLND (True Love Never Dies) LUWAMH (Love You With All My Heart) ILYSDM (I Love You So Damn Much)