What Does MANFLU Mean?

MANFLU means "A Man’s Exaggerated Response To Symptoms Of Cold Or Flu."

The word MANFLU is often used by women (and sometimes by other men) to refer to "A Man’s Exaggerated Response To Symptoms Of Cold Or Flu." Whilst MANFLU is typically used humorously, it can also be used pejoratively to imply that a man is deliberately exaggerating the symptoms of illness in order to elicit sympathy or avoid work.

MANFLU is widely regarded as a joke condition. However, in 2017, Dr. Kyle Sue, a clinical assistant professor at Memorial University of Newfoundland, suggested men may actually suffer worse and more prolonged symptoms than women when faced with the common cold or flu, due to have having weaker immune responses to respiratory viruses.

When I write MANFLU, I mean this: 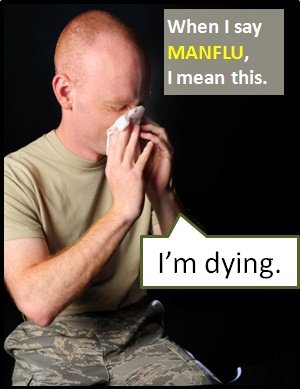 MANFLU is never "Just a cold."

Examples of MANFLU in Sentences

Here are examples of MANFLU being used in conversations: Two weeks later...

An Academic Look at MANFLU

As it is formed by merging two words into one, MANFLU is classified as a portmanteau word. It is formed by amalgamating man and flu. (The word "flu" is an abbreviation of influenza.)

The word MANFLU, meaning "A Man’s Exaggerated Response To Symptoms Of Cold Or Flu," predates the digital era.

Example of MANFLU Used in a Text