MHBFY means "My Heart Bleeds For You."

The abbreviation MHBFY is used with the meaning "My Heart Bleeds For You" as a sarcastic response to a complaint or to a story of bad luck or misfortune. MHBFY typically indicates that the sender does not share the perspective of the recipient and believes that they do not deserve the sympathetic response they are looking for. For example: The phrase "My Heart Bleeds For You" was originally used by playwrights such as Chaucer and Shakespeare to indicate great sympathy and compassion. However, nowadays it is almost always used sarcastically.

When I write MHBFY, I mean this: 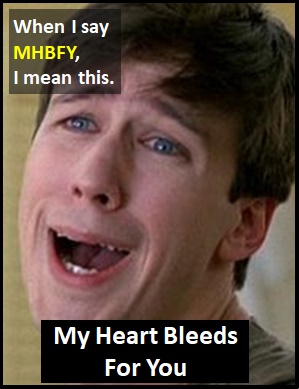 Examples of MHBFY in Sentences

Here are examples of MHBFY being used in conversations:

An Academic Look at MHBFY

MHBFY is an initialism abbreviation. Technically, this means it is pronounced using its individual letters (i.e., Em Aitch Bee Eff Why), but as this is harder to say than "My Heart Bleeds For You," it is not often uttered using its letters. In other words, the abbreviation MHBFY is for efficiency in writing and not efficiency in speech.

Before the digital era, we might have just said "My Heart Bleeds For You" or something like "You Poor Thing" instead of using the abbreviation MHBFY.

Example of MHBFY Used in a Text