What Does MLM Mean?

mlm is an emoticon for "flipping the bird" (i.e., giving someone the middle-finger gesture). Note that mlm only works as an emoticon when typed with lowercase letters.

MLM is also an abbreviation used with the meanings "Multi-Level Marketing," "Man Loves Men," and "Muslim Lives Matter." Here is more information about each of these definitions of MLM, together with examples of use.

When typed in lowercase (i.e., as "mlm"), the abbreviation MLM is an emoticon, which represents the offensive gesture of raising the middle finger and "flipping the bird." For example: It is believed that the raising of the middle finger has been used as an insult since at least the 5th Century BCE. The earliest recorded mention is in the Greek play "The Clouds," written by Aristophanes, in 423 BCE.

Here's a short video explaining how to use MLM:

As an abbreviation, MLM is most widely used with the meaning "Multi-Level Marketing." In this context, MLM refers to a form of selling in which the company requires its distributors to recruit their own sub-distributors. Each distributor is compensated for the sales they make and also gets a percentage of the revenue generated by the sub-distributors that they recruit. For example: This type of business is often referred to as "Pyramid Selling" and is illegal in many countries.

In response to the popularity of the Black Lives Matter (BLM) Movement, MLM is now also used with the meaning "Muslim Lives Matter," as a way of drawing attention to the plight of Muslims throughout the world. (Especially to the genocide of the Rohingya Muslims in Myanmar and the treatment of the Uighur Muslims in China.)

When I write MLM, I mean this: 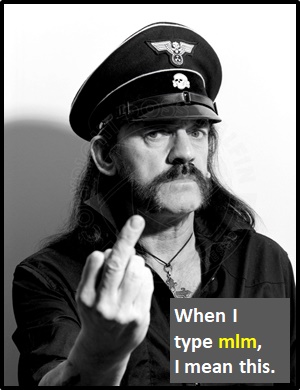 When typed in lowercase, mlm means "Middle Finger (Emoticon)". This is a common definition for mlm on Snapchat, WhatsApp, Facebook, and Twitter.

An Academic Look at MLM

When used to represent the "Middle Finger (Emoticon)", MLM uses lower case letters (mlm) as a graphic to represent an offensive gesture. It is an emoticon (i.e., a combination of keyboard characters used to express an emotion).

When used with the meanings "Multi-Level Marketing," "Man Loves Men," or "Muslim Lives Matter," MLM is pronounced using its individual letters (i.e., "Emm Ell Emm"). Therefore, it is classified as an initialism abbreviation. Initialisms are different to acronyms, which are spoken like words.

Before the digital era, we would have had to "flip the bird" face-to-face, instead of using the abbreviation MLM to represent the "Middle Finger (Emoticon)."

The use of MLM to mean "Multi-Level Marketing" has been widely used in business circles since before the digital era.

Example of MLM Used in a Text