What Does N2M Mean?

N2M means "Not Too Much." The abbreviation N2M is typically used with the meaning "Not Too Much" in response to an invitation, suggestion or question, when the sender wishes to indicate a lack of interest or enthusiasm.

The phrase "Not Too Much" is also abbreviated as NTM.

When I write N2M, I mean this: 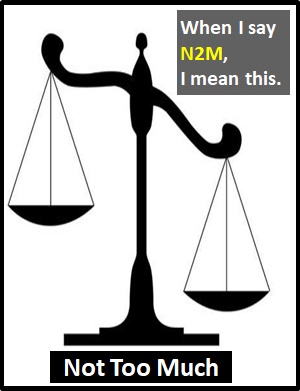 Examples of N2M in Sentences

Here are examples of N2M being used in conversations:

An Academic Look at N2M

Because some of its characters are used as substitutes for letters, N2M is classified as a cyber term. Initially, cyber term terms were introduced for brevity, but, particularly with the advent of predictive texting and on-screen keyboards, they are now mostly employed for fun. Cyber terms differ from icons because they are not pictorial representations.

NTM is typically used as a standalone declarative sentence (i.e., a statement). It is not normally used as another part of speech within a wider sentence.

Before the digital era, we might have just said "Not Too Much" instead of using N2M.

Example of N2M Used in a Text

N2M
Help Us To Improve Cyber Definitions
Please tell us using this form.

NSM (Not So Much) NMJM (Not Much Just Chat) NUFF (Enough)