What Does NBG Mean?

NBG means "Nasty But Good." The abbreviation NBG is used to describe something that is horrible, but enjoyable. This could be something like a strange combination of food, a disturbing film or a thrilling experience (such as bungee-jumping). In dating terms, NBG is an act or situation that might be considered "unnatural," but which is fun or exciting.

When I write NBG, I mean this: 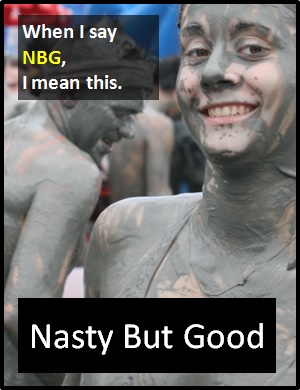 Getting completely plastered in mud is NBG.

Examples of NBG in Sentences

Here are examples of NBG being used in conversations:

An Academic Look at NBG

As it is pronounced using its individual letters (i.e., "En Bee Gee"), NBG is classified as an initialism abbreviation. Initialisms are different to acronyms, which are spoken like words.

When used with the meaning "Nasty But Good," NBG is an abbreviation of an adjectival phrase i.e., a group of words that describe a noun or pronoun in a sentence. For example:

Before the digital era, we might have said something like "it was disgusting, but I enjoyed it" instead of NBG.

Example of NBG Used in a Text