What Does NEGU Mean?

NEGU means "Never Ever Give Up." The abbreviation NEGU is used to encourage persistence in oneself or in others.

The NEGU Foundation was inspired by 12-year old Jessie Rees, who died of brain cancer in 2012. The foundation aims to encourage and support kids and their families who are fighting cancer to "Never Ever Give Up."

When I write NEGU, I mean this: 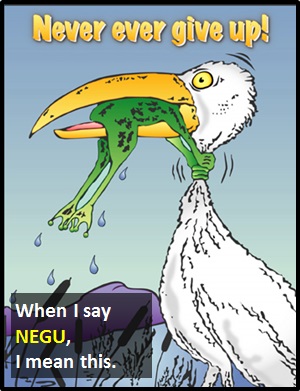 Examples of NEGU in Sentences

Here are examples of NEGU being used in conversations:

An Academic Look at NEGU

Although it looks like an acronym (i.e., an abbreviation spoken like a word), NEGU is actually an initialism abbreviation, pronounced using its individual letters (i.e., "Enn Ee Gee Yoo"). However, it is not often spoken using its letters. NEGU is used for efficiency in writing, rather than efficiency in speech.

NEGU is typically used as an imperative (i.e., an order).

Before the digital era, we might have just said "Never, Ever Give Up," or something like "It's Not Over Until The Fat Lady Sings" instead of using NEGU.

Example of NEGU Used in a Text

NEGU
Help Us To Improve Cyber Definitions
Please tell us using this form.