What Does NHL Mean?

(The National Hockey League) is the North American professional ice hockey league composed of 30 member clubs (23 in the United States and 7 in Canada). The NHL was formed on November 26, 1917, in Montreal, Quebec, after its predecessor, the National Hockey Association (NHA), was disbanded after operating for just 8 years.

The NHL took the NHA’s place as one of the leagues contesting the Stanley Cup, an annual interleague playoff competition (and the oldest professional sports trophy in North America). However, after a series of league mergers and closures, the NHL became the only league left competing for the Stanley Cup by 1926.

Of note, although the nation referred to in its title is Canada, the league has been binational since 1924, when the Boston Bruins became the first US team to join the league. Nowadays headquartered in New York City, USA, the NHL is considered to be the world’s premier professional ice hockey league, and one of the major sports leagues in the United States and Canada.

When I write NHL, I mean this: 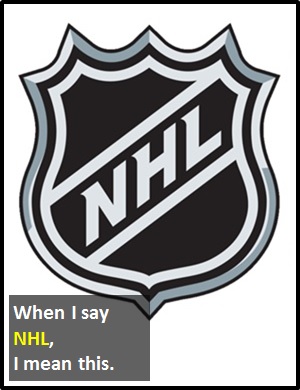 The image shows the official logo of the NHL (National Hockey League).

Examples of NHL in Sentences

Here is an example of NHL being used in a conversation:

An Academic Look at NHL

NHL is an initialism abbreviation. This means it is pronounced using its individual letters (i.e., En Aitch Ell). Initialisms contrast with acronyms, which are spoken like words.

Example of NHL Used in a Text

NHL
Help Us To Improve Cyber Definitions
Please tell us using this form.