What Does NOMS Mean?

NOMS means "food." NOM comes from NOMNOM, which refers to the pleasurable eating noises made when eating something tasty. Of note, NOMNOM derives from the sound made by the Cookie Monster from the children's TV show Sesame Street. (The Cookie Monster is known for eating cookies noisily.)

When I write NOMS, I mean this: 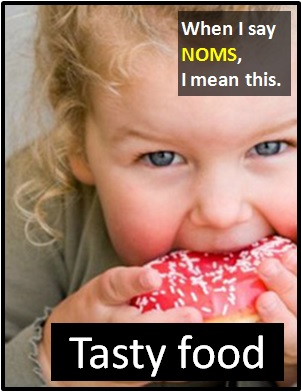 NOMS is a noun meaning food. It comes from NOMNOM (the noise made by Sesame Street's Cookie Monster).

Examples of NOMS in Sentences

Here are examples of NOMS being used in conversations:

An Academic Look at NOMS

NOMS is used as a noun (i.e., a naming word). Of note, NOM is an example of onomatopoeia (a word that reflects the sound of what it describes).

Example of NOMS Used in a Text

NOMS
Help Us To Improve Cyber Definitions
Please tell us using this form.