What Does OTP Mean?

OTP means "One Trick Pony," "One True Pairing," "One Time Password," and "On The Phone." Here is more information about each of these definitions of OTP, together with examples of use.

In the online game League of Legends, the abbreviation OTP is used with the meaning "One Trick Pony." In this context, an OTP is a gamer who concentrates on playing only one character and is focused on mastering that character to achieve the highest possible level.

OTPs are a hotly-debated topic amongst fans of League of Legends. Here's a video guide on how to become a successful OTP:

LoL OTP Guide - How To Become A One-Trick-Pony 101

OTP is used by authors and readers of fan fiction with the meaning "One True Pairing" to refer to their preferred romantic pairing. OTP is equivalent to "One True Love" and describes a couple who seem perfectly matched. Fictional examples of this include Klaus and Caroline from The Vampire Diaries, Harry Potter and Hermione from the Harry Potter series, and even cartoon characters such as Fred & Wilma from The Flintstones.

OTP is also used by fans of celebrity couples to refer to their favorites (e.g., Kourtney Kardashian and Younes Bendjima, Taylor Swift and Joe Alwyn).

OTP is more generally used with the meaning "One Time Password" (or "One Time Passcode"). In this context, an OTP is a password that is valid for only one use. OTPs are widely used in online banking and when users request a password reminder in other secure operations.

OTP is used with the meaning "On The Phone" as a quick text message, sent to someone who is trying to call the sender when they are already in a telephone conversation with someone else.

Here's a short video explaining how to use OTP:
OTP Meaning

When I write OTP, I mean this: 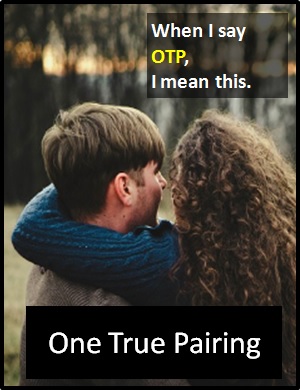 OTP also means "One Trick Pony" and "One Time Password."

"One Trick Pony" is the most common definition for OTP on gaming apps, such as Discord and TeamSpeak.

"One Time Password" is another common definition for OTP.

OTP also means "On The Phone."

Examples of OTP in Sentences

Here are examples of OTP being used in conversations with the meaning "One True Pairing":

An Academic Look at OTP

As it is pronounced using its individual letters (i.e., "Oh Tee Pee"), OTP is classified as an initialism abbreviation. Initialisms are different to acronyms, which are spoken like words.

"One Time Password," "One True Pairing," and "One Trick Pony" are noun phrases (i.e., phrases that play the role of a noun). The head word in a noun phrase will be a noun or a pronoun. In this case, the head words are Password, Pairing and Pony.

Example of OTP Used in a Text