What Does QLD Mean?

QLD (Queensland) is a state of northeast Australia on the Coral Sea (part of the Pacific Ocean) and the Gulf of Carpentaria.

Originally part of the colony of New South Wales, it became a separate state in 1859. Queensland is the second-largest and third-most-populous state in Australia, and Brisbane is the capital and largest city.

Queensland has many areas of natural beauty, including the Sunshine Coast and the Gold Coast (home to some of the state's most popular beaches), the Bunya Mountains and the Great Dividing Range. The Great Barrier Reef extends along most of its coastline.

When I write QLD, I mean this: 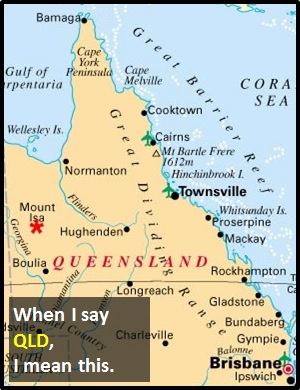 The image shows a map of Queensland, Australia.

Examples of QLD in Sentences

Here are examples of QLD being used in a conversation:

An Academic Look at QLD

QLD is an initialism abbreviation. Technically, this means it is pronounced using its individual letters (i.e., Kyu Ell Dee), but as this is harder to say than "Queensland," it is not often said using its letters. In other words, the abbreviation QLD is for efficiency in writing and not efficiency in speech.

Example of QLD Used in a Text