What Does RAINCHECK Mean?

RAINCHECK means "Postponement Until Another Occasion." When someone asks for a RAINCHECK, they are asking to postpone an invite to a later date.

The term RAINCHECK originates from baseball. In the 1880s, paying spectators would receive a "rain check" entitling them to future admission for a game that was postponed or ended early due to bad weather. The term soon evolved to refer to other kinds of admission tickets, coupons, and invitations.

When I write RAINCHECK, I mean this: 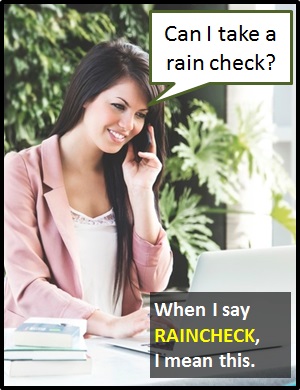 To take a RAINCHECK means to postpone plans until another time.

Examples of RAINCHECK in Sentences

Here are examples of RAINCHECK being used in conversations:

An Academic Look at RAINCHECK

RAINCHECK is typically used as a noun (i.e., a naming word). For example:

(Here, RAINCHECK is being used as a noun.)

Example of RAINCHECK Used in a Text